Of the several classes of Japanese woodworking tools which have been introduced to Western markets over the last few decades, it is hand saws which have been most widely accepted, followed probably in order by synthetic sharpening water stones (which also represent a remarkable advance on Western equivalents), chisels (which are in a class all of their own but require management of the ultra hard edge steel and rear scallops) and planes which are confronting to many because of their manual adjustment.

(An excellent read on the subject - Toshio Odate "Japanese Woodworking Tools: Tradition & Use") 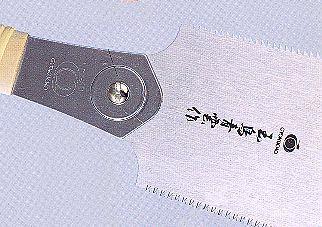 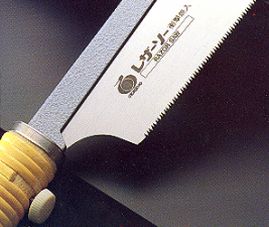 To take this a bit further, a comparative assessment of these saws is interested in several factors including force required, cutting speed, smoothness & precision, cost and controllability.

Force applied is well understood, cut speed is a function of sharpness, applied force and the tooth count (fine tooth blades are inherently slower than coarser ones due to the tooth gullets loading up with waste), smoothness & precision are determined by technique, tooth count and the grinding precision of the teeth and cost is a given (currently a quality Sheffield brass back tenon is about 30% more than an equivalent Japanese dozuki) whereas controllability is definitely an issue which separates the two styles. Japanese saws typically have a finer blade cutting a very fine and precise kerf and they do not like to be redirected at the start of the cut as is possible with more crudely cut Western saws.  The Japanese blades go where they are pointed and in this respect have a somewhat higher requirement for good technique on the part of the user. (Hint: While cutting monitor and keep consistent the shadow gap between the blade and the wood - in a dozuki with a 0.3 mm blade and a .033 kerf this gap is slight but it can be seen).

Despite this requirement for technique Japanese saws are a delight to get started and far superior to Western saws in this regard.

The magic then lies in the pull stroke, quality of the steel, the sophisticated tooth geometry (for crosscut blades in particular) and a supreme, centuries old metal smithing tradition such as exists in Japan. The result is the sensation that Japanese saws have become across discerning Western markets.

We at The Wood Works have marketed these saws for well over 20 years and for us they continue to outsell Western equivalents about 100 to 1. We offer a range of saws made by high precision machines in specialised factories and a deluxe range sourced from master blacksmiths producing what are in effect hand made saws. Most of the factory made saws are made by Gyokucho and have replaceable blades.  The deluxe range have fixed blades for which we can quote for resharpening at source.

In this data sheet

Crosscut teeth each have no fewer than three ground faces, all in shear, in contact with the wood during the cut. Rip teeth closely resemble western tooth patterns with a more or less vertical raker ground square across. To assist with getting rip cuts started the rip teeth of most ryobas are graduated in pitch, finer at the heel to larger at the tip. Universal teeth take some features from both crosscut and rip patterns and are preferred for dovetail cutting where angled end grain rip cuts have an element of crosscut.

The majority of the saws we list are ground and set from ultra fine, flat steel plate, as thin as 0.2mm in the case of the deluxe range and, more typically for many dozukis, 0.3mm. Blades this thin require a stiffener. These thin blades mostly have set where the teeth are flared at their tip to provide clearance in deeper cuts. Exceptions are unset fret saws and unset flushcut saws neither of which are required to make deep cuts in which an unset blade might bind.

The orikomi blade uniquely has a few rip interspersed among crosscut teeth along the cutting edge.

Arborist saws have a thicker blade which is taper ground across their width. The specified thickness of these blades is measured from setless teeth of the cutting edge, the back of the blade is thinner to provide cut clearance. The side faces of these blades is typically ground smooth to prevent flared teeth scratching the cut faces of bonsai and similar. 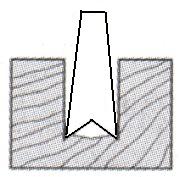 Many of the saws have a wooden handle wrapped with traditional rattan cane. This wrapping is very durable and if cared for will not unravel. Other saws have modern plastic handles. Some deluxe saws have resharpenable fixed blades which we can usually return to the makers for resharpening.

Most have replaceable blades with case hardened teeth which can be honed with special diamond feather files for those with the skill and the eyesight. These case hardened teeth last far longer than the resharpenable equivalent - we regularly replace blades after 8 or 10 years for customers who take good care of their blades.

Cheaper saws, especially those made outside Japan in Taiwan and China, have fully hardened teeth where the whole tooth is hardened. Gyokucho case harden their teeth one at a time which means the teeth have conventional, relatively flexible, tool steel in their core and a case of impulse hardened steel. The result is a greatly reduced incidence of teeth snapping off as is often the case with fully hardened teeth.

(For the technically minded "a cutting edge is heated for 0.003~0.005 seconds by applying an electrical current at 27.12MHZ. This creates a shock wave on the surface of each tooth that hardens it to Hv900~1200.  For comparison, sharpening feather files are hardened to Hv800~850.").

Dozuki saws have a stiffener which is re-used when changing blades. An extended full length stiffener is available to suit Items T1400 and T1401.

To assist with rust prevention and reduce friction in the cut, Gyokucho blades have a microthin nickel coating which is applied chemically (not by electroplating).  Despite this blades will rust (any quality steel will) so rust prevention practices are indicated.

See HERE for a selection of rust management products.

Our three best sellers from Gyokucho all have replaceable blades.

Class = the category of saw.

Overall Length = the overall length of the saw (unfolded where applicable).

Depth of cut = the maximum cut possible until the stiffener bears on the wood - pertains to dozukis.

Set / Kerf = set is the flare on teeth needed for clearance, kerf is the width of cut made by the blade in the work.

Unset = a few blades have no set for shallow cuts where binding is not an issue.

Tapered = a blade which is ground to be thinner at the back edge than the cutting edge.

Pitch = the distance between teeth (Note: Ryobas have variable pitch rip side blades - finer at heel, coarser at tip).

TPI = Teeth per Inch - the most common method of denoting tooth spacing in the foot & inch world.

Crosscut = a blade optimised for cutting across grain.

Rip = a blade optimised for cutting down the grain.

Universal = a blade with teeth which cut either cross or rip.

Shear = an edge meeting the work it is cutting at an angle, not square on - aka skew.

Set/Kerf = the width of cut (kerf) determined by the flaring of the teeth (set).

Stiffener = some blades are so thin they require a stiffening spine which is reused when changing blades.

Folding = a few saws have blades which unlock and swing back into the handle for safe storage of blade.

Turned up nose - some dozukis have a few setless leading teeth used to start cuts in panel stock - ply etc.

Item Code = the searchable code used to find the item in the website. Usually hyperlinked.

Table of Purchasing Options
For purchasing details use the code while searching at www.thewoodworks.com.au

The market speaks with authority on the order of purchase so consider these saws first unless you have a speciality interest such as cutting fret slots in guitar necks.